SCAM IN THE US PET SHIPPING INDUSTRY– And how easy it is to forge papers.

We have warned consumers about the prevalent scams in the pet shipping industry, and how it is very difficult to find companies you can trust.

This is the latest crime we have uncovered. Forgery of US federal documents, impersonating active duty military officers, and submitting falsified paperwork to the Korean Quaratine Authorities. All done by a shady third party shipper based in Virginia named “James ████████”.

Here’s the story, as simplified as possible: The Pet Owner hired an IPATA member Pet Shipper to move their two cats from the DC area to South Korea. The IPATA hired a third party handler named James ████████, who falsified all the USDA paperwork for the export of the cats.

The pet shipper included in their billed services the job of taking the pet to a US Military vet to obtain the official USDA international Health Certificate. This is a document that can cost several hundreds of dollars to obtain. (people have driven days to get it, spending fortunes)

Here’s where things get problematic. The Pet Shipper is not based in the DC area. So they do what is absolutely the standard practice by IPATA companies. They contact a third party handler based in the actual location of departure. In this case it was James ████████, of Nova Pets Health Center in Chantilly, Virginia.

James ████████ collected the cats from the pet owner, and then claimed he was taking them to a military vet to be given a health check, and be issued the Federal documents required for travel, endorsed by a US Military officer. This did not happen.

James ████████ created a FORGED SET OF DOCUMENTS. He lied to everyone (And of course, charged hundreds of dollars paid by the pet owner). The US Military vets reported to us afterwards that the cats did not go to ANY military veterinarian facility that day, or in fact, for several months prior to the incident.

James ████████ forged the USDA certificates, falsified the signatures of military veterinarians, and has fake stamps for at least two separate military vets.

The two cats then traveled from DC to Seoul, Korea, with the forged documents, having never actually seen a veterinarian for a health check. Upon landing in South Korea, the documents were inspected by the APQA (The local USDA equivalent agency), and despite some initial doubts, the pets were allowed to enter South Korea, but the documents were kicked up the organization for further scrutiny.

Once I had the documents in hand, I also doubted their validity. This prompted me to contact US military veterinarian facilities in Virginia, to follow up. That’s when I discovered that the cats had not seen any military vet for over two months.

What could have happened? First and foremost, James ████████ is a criminal, not just in legal sense, but to the animals’ well being. There’s a reason pets need to be seen by a professional veterinarian before flight. Health. A vet knows what to look for to ensure the pets don’t have any factors that could place them at health risk. James ████████ denied these cats the right to be seen by a vet to ensure they were actually fit to fly.
Second, had the forged documents been discovered upon arrival in Korea, the APQA policy is clear: Pets without a valid health certificate must be returned to origin, and if that is not possible, pets are to be immediately destroyed. As in killed.

James ████████ didn’t care if the animals lived or died. He doesn’t care what happens to animals. He’s a criminal, and should never again be trusted to handle anyone’s pets.
So the next question is WHY? The Pet owner didn’t hire James ████████. They hired a company recommended as an IPATA member, and placed their trust in them to handle the pets professionally. In fact, the pet shipper is a company well known to me, who while isn’t a common shipper for us to deal with, we get a few cases every year from them, and by all accounts the shipper is a well respected and trusted individual. James ████████ fooled them too.

It is important to point out that in theory, IPATA members are supposed to be professional and self-regulating to ensure complete “correctness” in their business operation. HOWEVER, and this is crucial: That “correctness” is not enforced by IPATA in any meaningful way. The organization expects members to just keep their word that they are going to do things right.

There is no mandate from IPATA to its member companies to ensure any VENDOR or SUBCONTRACTOR that is hired has been properly trained and vetted. Thus, James ████████operates under no supervision from the companies that hire him, who actually do train and hire THEIR employees. And yes, I said comapanIES. Because we have found that James ████████’s entire business operation is to provide contract work to IPATA pet shippers who are not local to the DC area.

Several years ago, we too were members of IPATA. However, after just a couple years of membership, it became clear to us that the lack of true ethics in the organization was not representative of our core values. IPATA is a business endeavor, and they protect their paying clients (the pet shipping companies) over protecting the actual pet owners.
Ironically, our relationship with IPATA started to sour when we witness an IPATA member here in Korea hiring contractors that were terrible at the safety of animal handling. We reported to IPATA leadership that animals were being put at risk, and IPATA’s response to us was (paraphrased) “IPATA has no control over members that hire contractors to represent them, and you should not waste our time by reporting this”.

I was extremely concerned about the dangerous practices I saw these contractors exhibit at the airport, where the IPATA company’s employees never even showed up, and it was just these yahoo taxi drivers bouncing animal crates around. I posted warnings to pet owners about being careful to select who they work with. IPATA’s response? Well, they immediately sanction me for “speaking bad about fellow IPATA members in public”. That’s when we abandoned our membership in IPATA. Their code of ethics literally prevents any member to speak out against worngdoings! This is word for word, number 10 on their Code of Ethics:

10. Avoid any slander, defamation or threat against any involved party and to avoid unfair competitive practices, actions or business practices in general which would result in dishonor upon or distrust of my colleagues, IPATA or the animal transportation industry in general.

Look, I have to say this: in the IPATA membership there are MANY honest, hard working, and professional individuals, who I would trust immediately with my own dog. But they are vulnerable to criminals like James ████████ because IPATA BANS MEMBERS FROM WARNING THE PUBLIC about dangers caused by malpractice in the “animal transportation industry in general”.

WHAT SHOULD PET OWNERS DO?

The military veterinarian chain of command has been alerted, and they are investigating past documentation. If your pet’s health certificate was procured by a pet shipper (not by you in person) has departed from IAD (Dulles Airport) and is CURRENTLY ABROAD, please check your records to ensure they are not endorsed by “Captain Mary M. Pico” or “Captain Jarred M. Piper GS12”. If they are, immediately contact your nearest military vet and ask them to review your pets’ history.

And lastly, what about the cats in question? Well, they are currently at home with their owner in Korea, but their status is in limbo. APQA is still deciding what their fate will be. They may still be forced to return to USA, or at least forced to retake all tests here in Korea. We will update as information is available.

Here at Shindogs, we do not hire external contractors for any of our processes. All our work is personally handled by Leo and Jin. Of course we have advantage that Korea is a small country, so we understand the same policy is not realistic in a country as big as the USA. However, we encourage all our American colleagues to be extremely vigilant regarding the practices of contractors. Ultimately, it is YOUR company’s name on the ticket, no matter who you hired to work on your behalf. 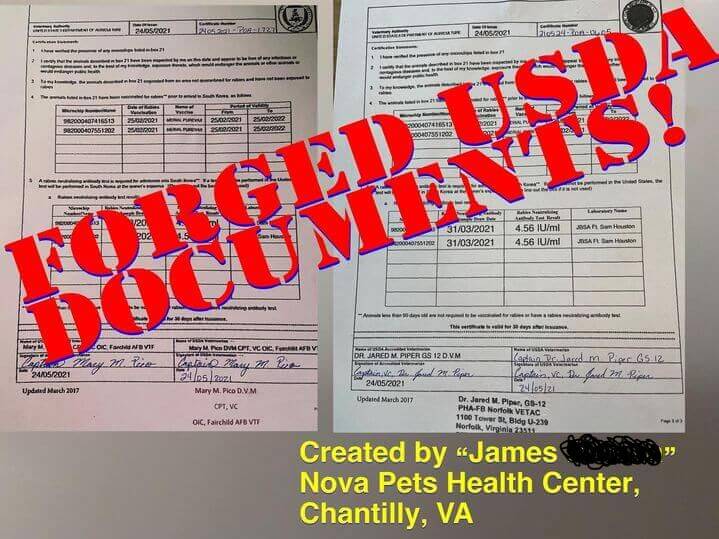