DON’T GET SCAMMED WHEN SHIPPING YOUR PET!

Literally save yourself thousands of dollars by NOT using IPATA 3rd party pet shippers! They are TOTALLY unnecessary and take anywhere from $2000 to $5000 extra from you.  Rather than have an overpriced third-party company take your money, turn to an independent shipper. You will find Action Pet Express is honest, reliable and can save you money.  Our LOWER prices do NOT mean lesser services!

Companies That You Should Avoid

This list contains some of the worst offenders; companies that solicit animal transport to labs, third-party shippers that overcharge, companies that require unneccessary documentation and paperwork, and companies that do NOT have the best interest of you or your pet in mind. Many of these companies below are known to charge anywhere from $3,000 to $6,000 MORE than an independent pet relocation service, such as Action Pet Express.

The most atrociously expensive 3rd party shippers are:

Lori Ankers new website is similar from other IPATA shippers...

She claims they are "TSA approved" - The TSA has little to do with Pet Exports from the USA. We ALL follow TSA guidelines and do NOT need to be TSA approved. This is just a gimmick statement used by a few shippers.

She claims "30-minute free consultation." - First of all, not much can get done in only 30 minutes! We offer UNLIMITED FREE consultation.

She claims "Cargo is 'more safe'?" - NO. The options are equal, as both 'Excess baggage' pets and 'cargo' pets fly side-by-side in the very same animal (AVI) compartment on the plane. But more importantly, cargo shipments are loaded BEFORE baggage. This means that baggage is off-loaded BEFORE cargo, so 'excess baggage' pets are available MUCH sooner to the passenger than 'cargo' pets. And, pets traveling as excess baggage do NOT need to meet the requirements of the country where a connection takes place.

There is one reason ONLY that so many IPATA shippers try to push cargo shipments as being best. This is how they can take more of your money. When shipped as 'excess baggage' NO pet shipper is required, so, IPATA shippers can NOT squeeze more money from you!

You do want to AVOID 100% IPATA 3rd Party Pet Shippers. They are TOTALLY unnecessary and take anywhere from $2000 to $5000 extra from you!! You do NOT need their unwelcome services!! They provide services you do NOT need or want. They hide this from you as they refuse to itemize.. You can, and should, deal directly with the pet shippers who will have hands on your pet move.  3rd party middlemen NEVER see or handle your pets, only your money!!

We encourage pet owners or caregivers to bring pets to Dulles and meet us to complete shipping check-in, whenever possible. This is MUCH less stressful for pets. Also owner can remain with pets up to loading time, usually about 1 1/2 hrs before flight. We assist with security check in and all paperwork. Our charge for this is $300 which includes booking and all details. NO extra fees for booking, consultations, check in, etc.  Compare this with all the other fees charged by other pet shippers. Our charges are an easy $1000 LESS than others.  This is for airlines that require a pet shipper.  We can, of course, pickup the pet(s) from any location to take to airport.

We will save you MUCH money on ALL pet shipments to USA coming thru Washington DC Dulles airport IAD.  Do NOT allow foreign pet shipper to make arrangements for arrival at Dulles. They will contact a fellow IPATA member so your costs will go WAY up. At least compare with what we will do for you and your beloved pet(s)!

We always encourage pet owners to receive multiple quotes to compare services.  You will find Action Pet Express is honest, reliable and can save you money.  Our LOWER prices do NOT mean lesser services!

Read more below about common scams, scare tactics and dishonest practices of these pet shippers. 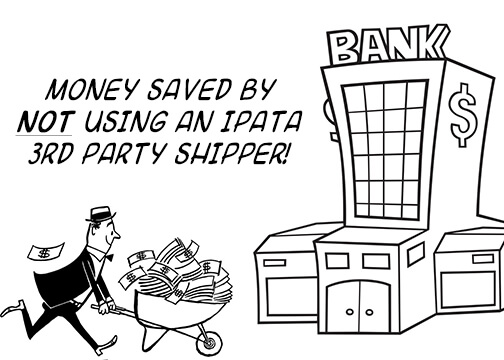 Companies You Should Avoid
Contact Us for more info

I used Jerry Mishler’s Action Pet Express to ship a one-and-one-half-year-old French Bulldog from Northern Virginia to Tokyo a few weeks ago (April 2021).  We ended up shipping my French Bulldog via Lufthansa airlines, and I’m happy to say she arrived safely.

Jerry is an older gentlemen.  He’s very knowledgeable and I could tell from his interactions with the personnel at Lufthansa, that they enjoy doing business with him.  They all knew him on a first name basis, and were joking around having fun.  This made me feel good about leaving my puppy in their hands.

Why would anyone pay that? Literally all they do is book the flight with the airlines, and then drop your dog off.  Anyone that pays that is insane, as you’re getting the same service Jerry provides, but for an astronomical price.  You don’t always get what you pay for…  Just remember, like I said, Jerry is an older gentlemen, so it can be a little difficult talking to him over the phone, but aside from that, he’s rock solid. Best of luck.

Your pet’s welfare and happy travel, at the most affordable price, is our mission.

Literally save yourself thousands of dollars by NOT using IPATA 3rd party pet shippers!  You do NOT need them. Get their quotes; then continue to shop around.  You WILL do MUCH better. You will easily SAVE from $2000 to $5000 by NOT using these firms.

3rd party shippers are MIDDLEMEN. They have you believe they are providing you great and needed services… They are NOT The only service they provide is INFLATED costs to you. We will explain all of this to you during our FREE consultation. You may NOT even need to use our services. VERY IMPORTANT TO READ THIS ENTIRE PAGE Save THOUSANDS of DOLLARS.

Rather than have an overpriced third-party company take your money, turn to an independent shipper.  Action Pet Express has been shipping pets safely for more than 50 years. Be wary of middlemen who charge inflated prices. Eliminate the middleman and deal with a hands-on company that offers great service and affordable prices.

Read more below about common scams, scare tactics and dishonest practices of these pet shippers.

IF YOU ARE ANXIOUS ABOUT SHIPPING YOUR BELOVED PET(S) on: United, Delta, Air France or KLM; YOU ARE JUSTIFIED! Let us help you make safer, more desirable, decisions. UA, DL, AF, and KLM are ALL ripping you off by requiring ONLY IPATA pet shippers to book international...

END_OF_DOCUMENT_TOKEN_TO_BE_REPLACED

Our owner, Jerry, points to three groups who are the culprits in pet shipping scams. These include the U.S. government, the Transportation Security Administration, and the International Pet and Animal Transportation Association (IPATA). The problem begins with TSA...

END_OF_DOCUMENT_TOKEN_TO_BE_REPLACED

A VERY serious situation exists. Puppies (who do NOT even exists) are being offered for sale on the internet. Innocent people are asked to send money by western union. Then there is NO way to trace. Emails are exchanged and the ‘New Owner’ thinks someone like myself...

END_OF_DOCUMENT_TOKEN_TO_BE_REPLACED

Many people have very negative feelings about the treatment of Live Animals at various Laboratories! They often do NOT want to do ANY business with anyone associated with these Labs! We are listing many IPATA members who actively solicit live animal transport to these...

END_OF_DOCUMENT_TOKEN_TO_BE_REPLACED

Owner Jerry Mishler has more than 50 years of experience in the pet shipping business. He has seen what has been happening over the years. He says IPATA is trying to take over pet shipping by making it a requirement that people only do business with members of this...

END_OF_DOCUMENT_TOKEN_TO_BE_REPLACED

We want to warn you to watch out for companies that overcharge customers. PetRelocation in Austin, TX; Happy Tails in Tucson, AZ; and Animal Land (petmovers.com) in Atlanta, GA are three of the biggest offenders. Others include: Pet Express, San Francisco, CA VIP in...

END_OF_DOCUMENT_TOKEN_TO_BE_REPLACED

An Honest and Sincere view from Our Perspective…… Pet Relocation’s Door to Door service is a MAJOR Rip Off. Do NOT be duped by their False Advertising….. Pet Relocation of Austin, TX publishes a ‘Blog’ almost daily. It is quite common for them to publish...

END_OF_DOCUMENT_TOKEN_TO_BE_REPLACED

Be AWARE! If you search for Pet Shipping needs from Washington, DC, the following 3rd party pet shippers usually show up FIRST:  STARWOOD ANIMAL TRANSPORT; ANIMAL LAND; HAPPY TAILS; and ANIMAL TRANSPORTATION WORLDWIDE. NONE of these have offices here.  They...

END_OF_DOCUMENT_TOKEN_TO_BE_REPLACED

URGENT WARNING! We’ve been receiving MANY complaints lately regarding HAPPY TAILS Pet Shippers in Tucson, AZ. VERY high prices and NOT too sharp on pet travel info! You might not use our services; but our FREE ADVICE may save you Hundreds, sometimes Thousands, of...

END_OF_DOCUMENT_TOKEN_TO_BE_REPLACED

PET TRAVEL STORE in Ft Lauderdale, FL is a MAJOR RIP Off Most of the paperwork they sell you is TOTAL useless. ALL paperwork you ever need WORLDWIDE is FREE from your Vet; or USDA; and/or can be downloaded from the internet. Pet PASSPORTS are ONLY issued by...

END_OF_DOCUMENT_TOKEN_TO_BE_REPLACED

If you are using PENDER or CAPITAL pet shippers in the D.C. area, you are spending AT LEAST $4000 MORE than with us! If using a 3rd Party shipper AT LEAST $5000 More! Let us show you these TRUE facts!! We encourage you to get quotes from many shippers. ONLY then will...

Ron was trying to find a reliable pet shipper.  His son is in the US Army and currently stationed in Germany.  He needed to ship a 75 pound German Shepherd to his son in Germany from the United States.  Ron decided to gather information from a variety of local and national pet shippers to determine the best option to ship his dog safely and at a reasonable price.

Out of the 5 pet shippers that Ron received a quote from, Action Pet Express was the cheapest by over $800!  Some of these IPATA shippers wanted to charge thousands more for the same service!!!  Our LOWER prices do NOT mean lesser services!

Don’t be fooled, IPATA 3rd Party Pet Shippers are TOTALLY unnecessary and you do NOT need their unwelcome services!! They provide services you do NOT need or want and they hide this from you as they refuse to itemize their quotes and bills. You can, and should, deal directly with the pet shippers like Action Pet Express who will have hands on your pet move.

The cost to ship his dog wasn’t the only reason Ron chose Action Pet Express to ship his dog to Germany over our competitors.  Many of them required numerous other items that are not technically required by the USDA or TSA to ship an animal.  Action Pet Express takes the stress and headache out of shipping your pet by only requiring what is needed.  We aren’t going to charge you for unnecessary items or paperwork.

Action Pet Express has experience shipping to the following cities and countries around the globe.  We provide kind service to all pet owners and specialize in Military PCS with Pets, Foreign Service and other Government pet travel assignment relocation services.